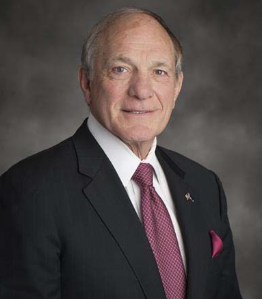 Admiral Lynch retired from the U.S. Navy after a decorated 32-year career. A graduate of the U.S. Naval Academy, his Naval assignments included Chief, Navy Legislative Affairs; Commander of the Eisenhower Battle Group during Operation Desert Shield; Superintendent of the U.S. Naval Academy from 1991 to 1994 and Director of the Navy Staff at the Pentagon from 1994 to 1995. He was also the captain of the 1963 Navy Cotton Bowl team with teammate Roger Staubach, its Heisman winning Quarterback. In 2010, he was awarded the USNA Distinguished Graduate Award. After retiring from the Navy, Lynch served as a Senior Vice President for Safeguard Scientifics, where he was responsible for operations, mergers and acquisitions and oversight of emerging partnership companies including CompuCom Systems where he became President and COO. Following that, Lynch became a Senior Vice President for Staubach Company and later Managing Director for the Musser Group. Admiral Lynch serves as Executive Chairman for NewDay USA.